I keep thinking about the people who raised Derek Chauvin, killer of George Floyd, and I keep thinking about the friends that must have affirmed him. I keep thinking about what messages his community must have sent him over and over again to make him think that kneeling on a man’s neck for nine minutes until he died was okay. And then, I have to think about how am I raising my own son, what tacit support do I give to racism in my own family and friend groups, and what messages are going out in my community?
Last year in November, the Social Justice Agency at the University of the Western Cape hosted a dialogue moderated by Asanda Ngoasheng where Robin DiAngelo presented some of her work on structural racism. Ngoasheng ended the session by asking white people not to burden black people with our guilt and to go to do some work on our own. 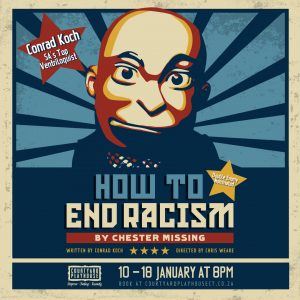 Ventriloquist Conrad Koch does exactly this in his theatre show entitled “How to end racism” where his puppet Chester asks him some confrontational questions. I can highly recommend the show, but in the meantime a few things for whiteys to keep going on:
– As people who have emerged after 350 years of colonisation, like alcoholics who no longer touch a drop, we are nevertheless recovering racists. We need to recognise how we have benefited from and participated in centuries of privilege and continue to do so. We can become more aware of the implicit and subtle ways we are racist every day and stop doing it.
– Get that racism is systemic and take an active stand against this system. Having black friends, asserting that we don’t see skin colour, or adding black people to our teams doesn’t do anything to change the systemic nature of racism. In fact, it can be a way to further deny the experience of black people in a racist society and shut down the conversation about racism.
– Be curious, be open, and listen. This conversation is not about us. Glamour magazine quotes the Ugandan organisation called “No White Saviours’: “We just know you shouldn’t be the hero of the story. If you’re not uncomfortable, you’re not listening”. For more on how to be a white ally go to https://www.glamourmagazine.co.uk/a…/how-to-be-a-white-ally…
#practicesforaturningworld
#mojoflo_facilitation

This entry was posted in Leadership, Practices. Bookmark the permalink.