We’ll be alive again in a thousand blades of grass

Philip Pullman’s “His Dark Materials” Trilogy features other worlds where our protagonists have “daemons” — essentially a part of themselves expressed in animal form. Inhabitants of these worlds have long observed the phenomenon that when they die, their daemons simply evaporate into the air. In this excerpt, Lyra, our chief protagonist, explains to the ghosts in the land of the dead what happens when you die:

“This is what’ll happen,” she said, “and it’s true, perfectly true. When you go out of here, all the particles that make you up will loosen and float apart, just like your daemons did. If you’ve seen people dying, you know what that looks like. But the daemons en’t just nothing now; they’re part of everything. All the atoms that were them, they’ve gone into the air and the wind and the trees and the earth and all the living things. They’ll never vanish. They’re just part of everything. And that’s exactly what’ll happen to you, I swear to you, I promise on my honour. You’ll drift apart, it’s true, but you’ll be out in the open, part of everything alive again.” 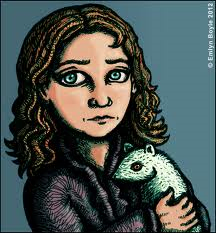 She finds support from someone in the crowd… “Even if it means oblivion, friends, I’ll welcome it, because I won’t be nothing, we’ll be alive again in a thousand blades of grass, and a million leaves, we’ll be falling in the raindrops and blowing in the fresh breeze, we’ll be glittering in the dew under the stars and the moon out there in the physical world which is our true home and always was.”

(The drawing is of Lyra and her daemon Pantalaimon in his favourite form of an ermine.)

16 October was the anniversary of the death of my beloved grandmother, Lorraine Mahoney, whose spark and love I continue to feel in the white waves charging to the shore, in the sun lighting up the mountain and the iridescence of the sunbird’s wing.

This entry was posted in Books, links and stuff, Quotes, Uncategorized. Bookmark the permalink.