“Everyone should have a holiday” – vision of Heinrich Booysen

“Everyone should have a holiday”, this is the vision of Heinrich Booysen, 24-year-old River Guide at Gravity Adventures. Booysen, a local from the tiny town of Onseepkans, has spent five years guiding trips for the folks who travel from Joburg and Cape Town. The trips take punters from Onseepkans into a majestic Orange River gorge, Goliath Herons on every corner, and heart thumping rapids. “My job is like a job and a holiday,” says Heinrich, who has a passion for being in nature. 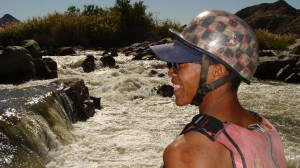 Heinrich now also plans to start his own small business running fishing and picnic trips for the people of his community. “A holiday is not about going shopping at the mall,” he says. “In the Onseepkans community, they think that it is only certain groups of people that do things,” he explains. “I feel bad about it – they have lived all their life along the river and never experienced the Gorge. Yet, anyone can have a holiday and it’s not about the money. I want to win the trust of my people and show them anyone can do it.”

Heinrich describes how many of the people his age in his community of Onseepkans have given up hope of finding a good job and spend their time drinking the wine that is produced locally. “People are scared,” he says. “They are scared of the river. They are scared of talking English. They are shy to communicate with different races. They’ll never talk to people they don’t know.” Heinrich is different. He started out cleaning and packing boats around the Gravity camp with his friend Alex before asking to go on the river. Next thing, he was doing a river guide course and chatting to clients from all over South Africa and the world. He is also studying public management in Springbok. It’s no wonder that Heinrich is something of a hero to the teenagers in Onseepkans who find little other inspiration in the hardships of their small community beset by poverty and isolation. 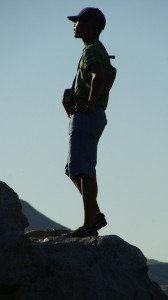 As a young leader, Heinrich has all the buoyancy of the two-man “croc” inflatable boats Gravity use on the river. “I see a mistake, and I learn from it,” he says. After a difficult break up with a girlfriend he found himself talking to “Big Bunny”, one of the biggest rapids on the stretch. This helped him resolve things and move forward. “Every time you feel down,” says Heinrich, “you should go to a quiet place and talk to nature.”

This entry was posted in Leadership, Profiles. Bookmark the permalink.